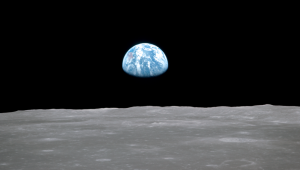 To what extent are we using our full potential? We can consider this question as an individual, as a city, or even at a wider human level. I was intrigued to recently read an obituary for the former astronaut Edgar Mitchell, the sixth man to walk on the moon, who pondered this question after an epiphany in space. Apparently whilst looking down at the Earth he saw it as a planet in a critical condition, marked by “deeper and deeper crises”. What was most intriguing is what he attributed this to. He highlighted “the need for a radical change in our culture”. He added, “I knew we were replete with untapped intuitive and psychic forces that Western society had programmed us to disregard”.

I was especially struck by Mitchell’s declaration as I had reached exactly the same conclusion based on my work for 35 years as a psychotherapist. That was my main motivation for writing a book about synchronicity. In Western society we are plagued by an overemphasis on rationality to the exclusion of using our deeper intuition. Academics often seem crippled by this bent. Even the field of positive psychology, in its quest for scientific respectability, has been very slow to explore a spiritual or transpersonal dimension in life despite its obvious importance to many people. Our reticence to explore things that challenge our understanding is extraordinarily self-limiting. We greatly limit our potential when we refuse to explore human capacities that cannot be readily explained by logic and reason.

I was further reminded of this when recently invited to be a guest speaker at the Australian premiere of the film Time is Art: Synchronicity and the collective dream. Over 300 people attended, quite a number of whom identified themselves to me as being psychics or spirit mediums. It was refreshing to hear of their ease at relating such abilities. Spirit mediums are often thought to be quacks or charlatans. This following story might challenge such views.

One fellow, whose day job is erecting tennis court fences, described how he further developed his powers as a medium after two near death experiences when he encountered the commonly described bright white light. Some time later, whilst putting in a fence for a customer, he tactfully checked whether the lady might be open to a message from beyond. She was sceptical about an afterlife, but remained a bit curious. He informed her that someone who was deceased wanted to convey a message to her about a white silk scarf. The lady immediately broke down, but wanted to hear more. Apparently a relative had repeatedly asked her for a white silk scarf, but she had refused to part with it – it was the final thing she resolutely held on to following her mother’s death some years earlier. The fellow suggested that her mother was trying to say it was time for her to let go of the scarf. She did so, and it helped her resolve her grief. She subsequently thanked the man for changing her life for the better. This is just one example of how we might underestimate our potential for a deeper intuitive awareness, and what I call “the power of supra-rational thinking”. At least we can remain open to the possibility. To dismiss the possibility of people having genuine psychic abilities, merely because this does not fit our preconceived ideas, is to abandon a scientific attitude.

Chris Mackey is a Fellow of the Australian Psychological Society, member of the scientific committee for the 2016 World Congress of Behaviour and Cognitive Therapies and author of the recently released book, Synchronicity: Empower your life with the gift of coincidence (available on Amazon and in select bookstores, or by pre-order, in the US, UK and Australia).