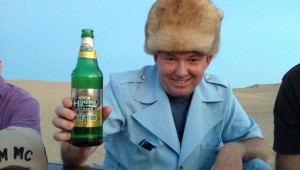 I have a vision of helping business and community leaders achieve turbocharged success. It involves teaching others how to draw on the powerful combination of synchronicity and kairos. This means appreciating the meaning of strikingly uncanny coincidences, and then acting swiftly before a rare opportunity is lost.

This might sound a little mad, but as Einstein suggested, that only increases my theory’s chances of success. Here is a practical example of what I mean, complete with a prediction of how things will likely unfold.

Two weeks ago I was playing Yahtzee with some mates amongst the majestic sand dunes of the Gobi desert – wearing a sky blue safari suit and Russian fur hat – as you do. The moonlit dunes cast surreal, yeti-like shadows across their giant faces. I’d had a long series of lousy dice throws and clearly needed a Yahtzee, or five of a kind, to catch up. When I next threw three sixes, something struck me. If I got two more it would be spookily fitting. After all, the cover of the German edition of my book, Synchronizitat, which comes out next month, has five dice, all sixes, on the cover. A minute later, a friend took my celebratory photo – the sky blue safari suit and fur hat, the moon over my right shoulder, five dice showing sixes, and holding up a celebratory Hyang beer. I later looked up “hyang” and it means “unseen spiritual entity that has supernatural power”. That fits.

The extraordinary continuing run of multiple sixes that I encountered in the next few days, often witnessed by friends, told me something was up. A direction emerged from numerous coincidences involving themes of Geelong business deals with China.

Firstly, as we took our final group photo in a Shanghai hotel foyer, I ran into woman I knew well from Geelong business circles. Flying home I read a China Daily article that spelt out the huge-scale demand for specific health information for Chinese workers. My wife’s forthcoming book on positive recovery from illness could be perfect for a key topic they’re interested in.

The next morning I learnt of a Geelong business delegation then heading to Nanjing, the base of our China holiday. Whilst reading about this in The Geelong Advertiser, sitting on my veranda, an elderly neighbour introduced herself. She spontaneously mentioned that her son was in Shanghai, where I’d been the previous day, to negotiate a business deal – he was an expert in Australia-China business relations. She later dropped in a note with his details, including names of his Chinese business contacts. The universe provides.

I’m calling it now. Our practice will be involved in a China business deal, probably including a translation of my wife’s book. This is not as fanciful as it sounds. Geelong business and community leaders are starting to seek me out to discuss synchronicity and its application.

A business friend recently speculated, only half-jokingly, that she might be going mad. I think she’s just going through satori, or an enlightenment experience. Sadly, most people can’t tell the difference between psychosis and satori. I have previously found that when I have been at my most creative phases, others have questioned my mental state. I’ve been trading off synchronicity plus kairos to turbocharge our business success for 20 years. It’s how we won business excellence awards before we thought we knew anything about business. It’s tricky, but it’s teachable.